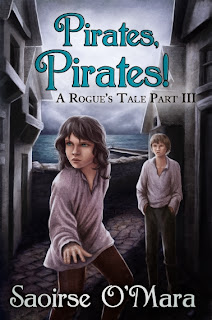 The cover for Pirates, Pirates! is my favourite of all three series covers so far. This time, I wanted Govin to stand back, as if he were merely watching the story unfold, since Tayla is solving most of the mystery on her own. I also wanted the cover to show that Tayla is diving into dangerous waters, so to speak. Her investigation of a murder she witnessed soon puts her own life at stake, but Tayla doesn’t give up. Willing to risk everything for the sake of a dead sailor she didn’t even know, she finds herself ensnared in a web of intrigues, greed, and piracy.
The background shows the open sea. Pirates, Pirates! mostly takes place in the harbour district of Davon so that’s the area depicted on the cover (at least part of the area).
My illustrator Svenja Liv did an amazing job on the cover. I love her attention to details, like the cobblestones and waves, and Tayla’s stunning eyes that match the colour of the title on this cover. She’s a very talented young artist from Ireland and also does my illustrations for the Miro the Dragon series. If you want to check out more of her work, go visit http://svenjaliv.com.

Imagine you witness a murder, but have no clue who the man was, or why he had to die. Imagine you stumble into a rat's nest of piracy and greed, and put your own life at stake for the sake of justice. Imagine you don't know who you can still trust....

No matter how she looked at it, she ended up with far too many suspects. How should she ever get to the bottom of the attack and the murder if almost half the harbour population had a motive?

Saoirse O’Mara is a writer of children’s and YA books, mostly in the fantasy and mystery genres. She lives in Germany with her husband, her muse, and her imagination. In 2011, she “met” Tayla and Govin, who then demanded to be written into a story; The Lost Diadem, part one of the A Rogue’s Tale series, was published in 2012. Apart from them, a tiny dragon named Miro requires her attention. He’s the main character in her children’s book series, Miro the Dragon, which is published under the name of Theresa Berg. You can also find Miro on Facebook: http://facebook.com/MiroDrakonia


a Rafflecopter giveaway
Posted by Unknown at Thursday, October 17, 2013