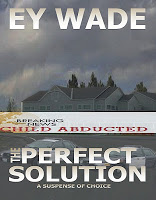 THE PERFECT SOLUTION--  A suspenseful analysis of choices and how those choices affect the people around us.
Anger destroys a relationship; A teenaged babysitter decides to go to college.
A single parent places her child in daycare.
A three year old is mistakenly given to a stalker by his pre-school teacher.
"I placed the most precious thing in my life in your hands and you people did not take your job seriously." These are the words of the distraught mother when she learns of the abduction of her child.

When Saturday mornings rolled around Catrine Teddi would bring her three year old son Brhin to eat breakfast at McDonald's. It was an established routine to mark a day of errands and bonding. She never paid attention to the woman sitting in the shadows across the play yard watching the little boy.

Mona Boots, deciding she wanted Brhin as her own, spent weeks stalking him and his mother. In her delusion to finally do something right in her life she enters The Perfect Solution Childcare Center and leaves with Brhin-Kristoffer Teddi in her arms. It's a choice she is prepared to defend.

Ey considers herself to be a caged in frustrated author of thought provoking, mind bending eBooks, an occasional step-in parent, a fountain of knowledge, and ready to share. She is the mother of three daughters that were previously home-schooled and are now either attending college or graduated from college and the drooling 'Lovey' to a little boy. Ey was born in Texas and reared as an Army brat. There is the constant need to speak, writing and telling stories is the way she choose to socialize.

As a writer she had an essay in Essence magazine, published nine books and had several articles printed in the local paper and magazines. As the single-parent of three daughters, Ey Wade has worked in the childcare profession for over thirty years. Child safety has always been a concern in her life and she has drawn on those experiences to write the novel which has gained the attention of parents, parents-to-be, and child care professionals.

All of her books are highly recommendable to your friends, family and coworkers.