Excerpt: The Carpet by Alberta Ross

It was created many years ago, before recorded history when the world was so young. Beneath hills that, resting on living lava, were still rising and would one day be mountains reaching up to the clouds and looking down on the birds. In a valley of ethereal beauty wreathed in the obligatory mists of such places, on the edge of the very beginnings of a mighty lake stood the small shack that housed the hollowed-eyed slave children with their small, and not yet crippled, fingers which could form the dazzling magical jewelled colours of the flying carpets.

These carpets were few and would become the stuff of legends, flying into tales handed down around firesides for centuries and eventually moving from mouths to printed page. Imbued with the magic that could still exist in those far of times of innocence they were mostly splendid, magical and benign. Fetching fabulous collections of gold and jewels in payment they were, of course, playthings for the powerful and mighty. The private jets of the primitive world. A few, just a few, scorned benign, lusted after dark magic and turned evil, riding on the wave of awfulness which swept the world at regular intervals.
How many of these carpets survived the ravages of time is not known. They fell in their hundreds in ancient battles, burnt from their orbits by cunning weapons of fire, the technology of which was lost for millennia. They sunk in galleons on wild untrammelled storm-trashed seas and drowned with the weight of water-filled fibre, to become the cave coverings of those mystical mythical denizens of the deep. Many were lost in disbelief, for magic needs belief to live. In the same way many were lost to science; faced with the proof of the impossibility of carpets to fly, they foundered and fell from the sky. A few lingered on in isolation as the mountains rose, until memories of what such a carpet could achieve was lost and they became so much floor covering over mud and animal dung.

This story was the result of a dream I had over thirty years ago. It stayed with me as vivid as the night it had first disturbed me. The particular magic of the carpet in this tale of magic and mayhem came intact from that first inspiration.
As a child I had marveled as we all had over those mysterious flying carpets, or maybe it is not so amazing to children today.  I am not so old that flying was a new invention! However, apart from the fighter pilots and the very wealthy not many had flown. I was the first in my family when I flew across to Belfast as a 17yr old just before the boom in tourism.  So the idea of a magic carpet when I was young was indeed a marvel.  How was it possible?
I had given up on magic fairly early and so this ability intrigued me.  Over the years I hoped to find some historical record of how it was possible. Giving up and condemning the education system for not giving exciting information! After I left home I wandered extensively, always traveling east, to the lands that had always intrigued me in my childhood, did I still want to understand how a carpet could fly, no, really, no, I was all grown up by then.  They didn’t exist.
Traveling around the Hindu Kush and the Himalayas I met many carpet workers, saw many natural marvels and began to get a feel for the culture who had invented those splendid tales. The stories we call fairy tales all suit the cultures they begin life in.  They are born of the history, geology, social mores and religion of the times. They are part of the imagination of all these.
So when, well into my retirement, I thought I would like to write short stories my carpet raised a sleepy head and asked if it was time.  I agreed it was but that it would need to be part of a wider picture.  I am no expert on life in the East so somehow my carpet had to be transferred to my culture.  I am no expert on the ‘Once upon a time’ era so the carpet must be able to travel to my time. Always the adventurer the carpet was up for it:) 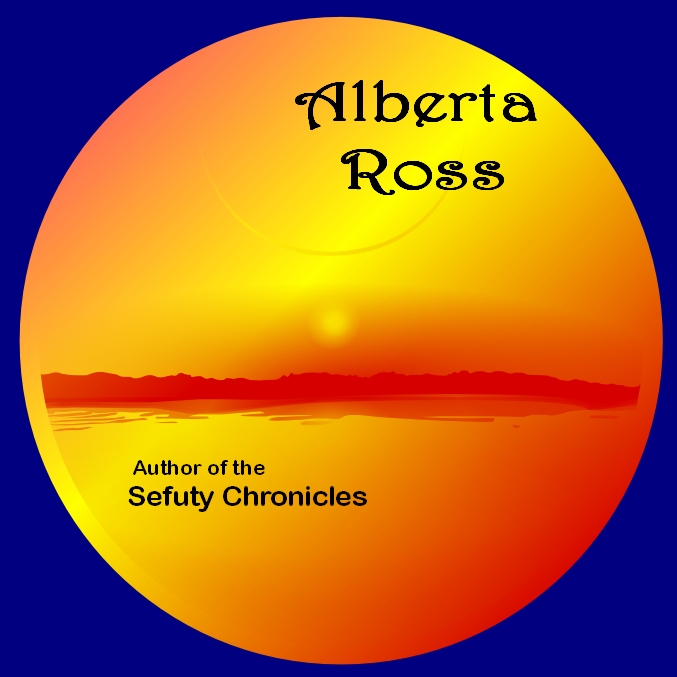 Alberta  spent the first part of her adult life traveling the world, the middle years studying and now has settled down to write. From the first part she has endless photographs, memories and friends. From the second  a BSc Hons, an MA and friends. Now in this part everything comes together.

Over the years her interests have expanded, as has her book and music collection. A short list would include reading (almost anything) science, opera, folk, gardening, philosophy, crazy patchwork, freeform crochet, ethics, social history, cooking (and eating of course) gardening, anthropology, climate change and sustainability.

Alberta says the best gift her parents gave her, apart from a love of reading and music, was an interest and curiosity in everything which, in itself, has become a total inability to be bored and for this she is always grateful.


http://sefutychronicles-albertaross.blogspot.com for background to the writing of Alberta’s publications

http://www.didyoueverkissafrog.typepad.com for whatever takes her fancy


http://albertaross.wordpress.com for all things writing

Alberta can also be found on:

The Fiddling Feline, the Flea and the Frog et al is visiting other blogs over the next two weeks


http://theindieexchange.com on the 3rd December


http://www.virginiajennings.webs.com on the 5th December


http://mrsbongle.wordpress.com on the 6th December


http://indiebookexchange.blogspot.co.uk on the 12th December


There will be six e-book copies of The Fiddling Feline, the Flea and the Frog et al up for grabs at the end of this mini tour – winners will be selected randomly from those who comment.  I can offer print copies only to UK residents.