“The Greener Forest” is a collection of fantasy short stories. “Blood of the Swan” is a winter tale of magical justice. In the story, Jorund has been sent on a perilous journey to find a healer by Smid, the cruel ruler of the town of Egil. Thin ice has already claimed Jorund's best friend's life and all his provisions. Cold, hungry, and uncertain if he'll see the next day, he breaks a taboo...

“There was blood on the snow. And not far away, an arrow and feathers. But Jorund knew it was not the blood of a human, for it was from his bow that the arrow had soared. It was his arrow, carefully whittled from a tree branch and feathered with gull's plumes that had pierced the flesh of the swan. And now, Jorund trudged through the winter forest in search of the wounded bird.

He knew to eat of swan's flesh was taboo, but he was hungry; and the bird had looked well-fed. Besides, there was no risk of being discovered with a wounded swan, for he was alone. Utterly alone.

But at least I have flint and blade, a leather sleeping bag, bow and arrows, and woolen blanket, thought Jorund as he followed the blood splatters in the snow. Though those things would do him little good if he didn't find food and shelter soon.

His grumbling stomach refocused his thoughts on the swan. It had been flying between the tree branches, sailing low, preparing to land when Jorund loosed his arrow. The cry the creature had made when wounded had been like nothing he'd heard before. It had sounded almost like a frightened child. He shivered. Jorund rarely pitied his prey, but the swan's cry had chilled the marrow of his bones.

He stopped walking. Though the falling snow muffled noise, he thought he heard someone calling. He veered from the path and pushed his way through a thicket of brambles. The voice grew louder as he neared a rocky outcrop. The swan would have to wait. Anyone lost in such weather would freeze to death. And freezing wasn't a pleasant way to die.

Jorund could clearly hear a voice now. It sounded like a woman or maybe a child. At the base of a large boulder about fifteen strides in front of him, someone dressed in a blood-stained white cloak laid sprawled in the snow.

“I'll do what I can,” promised Jorund as he knelt down. He reached for the white cloak, ready to pull it back and examine the stranger's wound when a small hand grasped his wrist.

“Not here. My home isn't far. It'll be warmer there,” said the stranger as she turned her head to look at him.

Jorund found himself speechless as he looked into the golden-brown eyes of a young woman.

“Yes. I mean, I can carry you.” He slipped his mittened hands under the woman, lifted her into his arms, and stood. She weighed less than he imagined. “Which way to your...”

“Home,” she answered. “It's around the other side of this hill.”

Jorund nodded. He slogged his way through the snow, carrying the injured woman. She smelled like flowers, though he knew no flowers bloomed in the deep of winter.

“There,” she said as she pointed to a stone cottage built into the side of the rocky hill. “There, is my home.”

Jorund carried her to the cottage, pushed open its heavy door, and laid her on a wooden sleeping platform covered in blankets. He shut the door, lowered its locking board into place. After slipping off his bow, quiver, and carrying sack, he placed them on the floor beside the door. When he turned around to face the woman again, he saw she was watching him.

“And I thank you for finding me, Jorund of Egil. We'll discuss what healing you need from me later. For now,” she said as she pulled back the white cloak to reveal a cream-colored gown with a large bloodstain marring its right side. “I need your help to clean and treat these wounds.”

“I'll do what I can,” he responded as he gingerly pulled off Liv's cloak and gown. He drew a nearby blanket over the left side of her body and kept his eyes focused on her injuries. There was a minor flesh wound that sliced across her right side, but it was from the gaping hole in her right arm that the blood  trickled in a constant stream. He frowned, then lifted his head, gazed into the woman's eyes.

Jorund studied the cloak more closely. It was woven of feathers, not wool. He'd been following the swan's blood when he'd heard her cries. And Liv's wounds were just about where the swan he shot would have been pierced. Which could only mean...

“Forgive me, Healer,” Jorund begged as he knelt by the swan-maiden's bed. “I was hungry, and the hour was late. I didn't mean...”

“It is done,” responded Liv. “Now, fetch hot water from the kettle, a clean cloth from the chest near the door, herbs from my stores, and the jar of healing salve from the mantle. You must make whole that which you've damaged.”

Jorund felt compelled to look into her golden eyes. He owed a blood-debt to the swan-maiden, and he was sure she meant to collect...”


You can buy “The Greener Forest” here: http://coldmoonpress/quickbuy.html 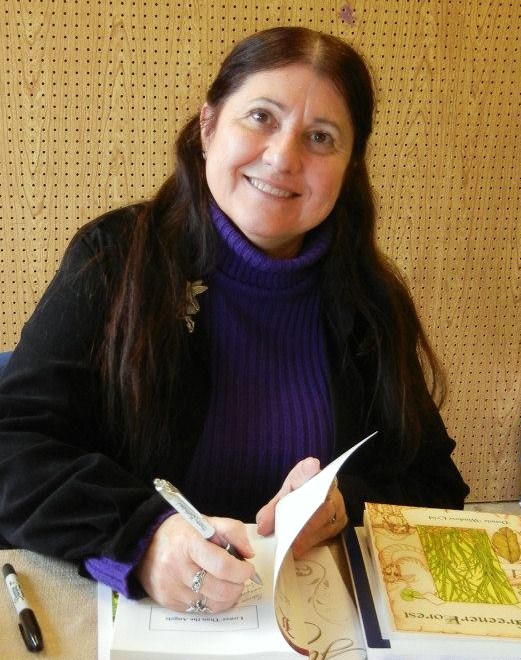 Born in the Year of the Dragon, Vonnie Winslow Crist has had a life-long interest in reading, writing, art, myth, fairytales, folklore, and legends. A firm believer that the world around us is filled with miracles, mystery, and magic, Vonnie still sees fairies amidst the trees, mermaids on jetties, and ghosts and goblins of all sorts in the shadows. Her garden overflows with herbs and statues of animals. Toadstool rings sprout regularly on her lawn. And she's found so many four-leafed clovers that she keeps them in a jar.